HH: Hi, I’m Hollie Harding. I’m currently studying towards a PhD at Trinity Laban in Composition. I also teach here on a course called Listening to the 21st Century. I recently had my final piece performed at The National Maritime Museum. It was called Melting, Shifting, Liquid World. 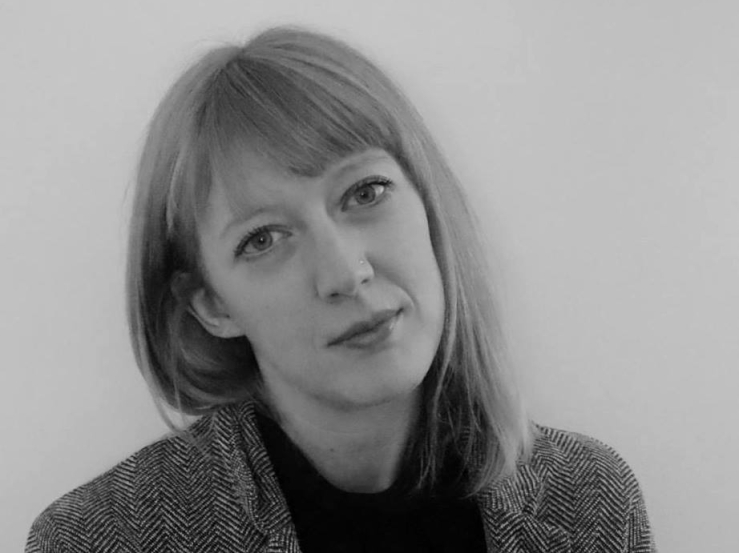 WH: (In situ) We’re approaching the Stanhope Entrance of The National Maritime Museum. They’ve closed the whole place just for us this evening.

HH: A huge part of the piece was thinking about climate change and ocean pollution. Melting, Shifting, Liquid World was an immersive, site-specific piece written for performance at The Great Map at The National Maritime Museum. I wrote it for the Head of Strings, Nic Pendlebury, to play on electric viola, and Trinity Laban String Ensemble. There was also an electro-acoustic tape part delivered to the audience over bone-conduction headphones.

WH: What exactly are bone-conduction headphones?

HH: They’re quite different to normal headphones. They send sound via micro-vibrations through your cheekbones and straight to your inner ear. And they leave your ear canal unplugged so you can hear other sounds as well.

Dario Ferrari (DF): (In situ) We’re currently in The National Maritime Museum, waiting apprehensively in the lobby. There’s a sense of rehearsal happening in the background; occasional harmonic frequencies reverberating round the beautiful open space.

WH: (In situ) What is it like to put on the bone-conduction headphones?

DF: (In situ) It certainly requires you to actually engage with it properly and find the sweet spot for you. 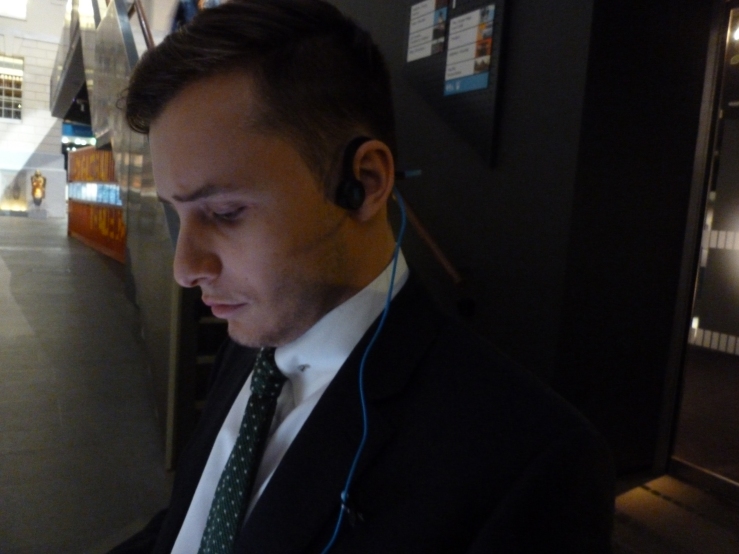 WH: (In situ) They go around the back of your head and by your temple, but not in your ears.

HH: Bone-conduction technology was developed originally for the army so that soldiers could hear instructions as well as the environment and they’ve since been put into commercial use by the company AfterShokz, primarily for cyclists and for runners so you can listen to music or podcasts while you’re doing your exercise.

WH: I was at the dress rehearsal and the first performance of the piece and what I saw was players spread in a ring around the Great Map in the Maritime Museum with Nic Pendlebury in the middle, along with amplifiers around the space. So there were quite a few levels of sound that the audience are hearing. They’re hearing the live acoustic sound, they’re hearing recorded sound – through the bone-conduction headphones – and they’re hearing sound through the speakers.

WH: Why have you chosen to present the music in this way?

HH: My PhD research is looking at space and physical action as elements of musical performance and how that can influence composition. So within the piece I was playing with the idea of layers of sound around the listener. The aim of that was also so that every listener, or every audience member, had a unique experience depending on where they decided to place themselves.

As part of my research I was reading an article by Edward Hall about proxemics, which are concentric circles of space around a listener. So there’s the intimate space which is all touch-related and quiet, soft sounds – the sounds that you don’t normally hear when you’re further away from things – and then public space which is divided into different layers depending on how far away something is from you. I was moving sound between those layers, creating this shifting sonic environment.

WH: (In situ) You’re only really hearing half the story because the other half is actually only in our ears – or rather, resonating in our skulls. We hear, besides the strings, what sounds like a set of synthesised chimes and string glissandos with heavy reverberation imitating, perhaps, whale song.

Ui Yoshida (UY): (In situ) At one point, I really felt my ears. They were, like, tickling. Did anyone else feel that?

DF: (In situ) The addition of the physical sensation, which is usually explicitly absent from music, adds a dimension which is good to explore.

WH: What were audience members hearing through the bone-conduction headphones?

HH: The electro-acoustic tape part was made up of field recordings of Arctic sea-ice; white noise; climate change data which I’d converted into sound – it was basically oscillating sine tones which created beating patterns between the ears – and there was also a poem by Maura Dooley which happened at the very end of the piece.

WH: (In situ) We’ve been transported to a soundscape that is less an ocean of movement and more an eerie landscape of icebergs and frozen water; ethereal, high-pitched sounds in our ears; whistles and harmonics on the acoustic instruments.

How did you approach the music in the piece?

HH: Quite a lot of the textures are built out of repeated loops of material in your own tempo, so that creates this layered effect, and that was also partly born out of logistical challenges of working in space. You can’t write for an ensemble in the traditional way when you’re spreading them out because they can’t hear each other; co-ordination becomes an issue; synchronisation becomes an issue.

WH: (In situ) The players have stood up and begun to move around the room, walking over the map of the world.

Jake Taylor (JT): (In situ) You couldn’t really figure out, a lot of the time, where different sounds were coming from. There was one moment that was completely surreal for me, where I thought this violin was coming from the bone-conduction, but it turned out that there was just a guy with a violin approaching slowly from behind and then I figured out that it was him all along. He just stood there playing the violin into my ear for a few moments.

HH: There’s also quite a lot of melody in the piece. After the initial atmosphere is established, Nic plays a refrain which is echoed by the ensemble. 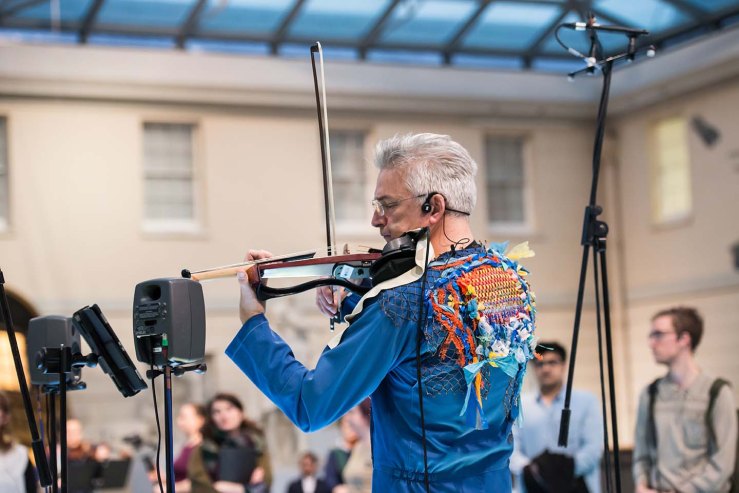 They take the last note of his melody and it spatially spreads from the centre to the outer edges of the map.

DF: (In situ) I would perhaps say I was conscious of three or four movements as opposed to a narrative that I was cognisant of throughout.

WH: (In situ) I heard whales and I heard what sounded like ice cracking as if we were going through a small gulley between the icebergs.

DF: (In situ) The information we were being fed conductively was certainly holding your hand through the narrative, if you want to use that word, whereas what we were hearing acoustically was following.

WH: (In situ) It felt as if the acoustic sound was more a part of the room, a part of the architecture, than of the music. It was adding a denser texture to the air for you to move around in.

(Interview) Could you tell us about the costumes that the performers were wearing?

HH: I knew quite early on that I didn’t want the performers to be just wearing standard concert dress, so I got in touch with the costume department at Laban and I ended up collaborating with four costume designers.

We had two research and development days where they showed me textiles that they’d made out of recycled plastic. They wove plastic bags and up-cycled plastic into netting that was donated by fishermen. 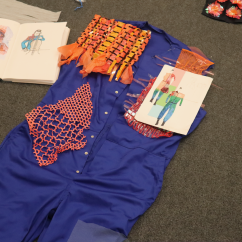 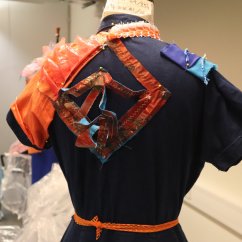 WH: (In situ) The musicians are on the move. They seem to be converging on the centre point where Head of Strings Nic Pendlebury, dressed in blue overalls with maritime-themed steampunk adornments, stands with his electric viola.

I was impressed by the way that the musicians presented themselves. It reminded me – if you’ve ever seen Star Trek: The Next Generation – of the hive-mind alien species ‘The Borg’, who are oblivious of their surroundings and are working towards some higher purpose, unseen by us. And it felt quite like that as an audience member, that we were in the midst of these dehumanised presences. 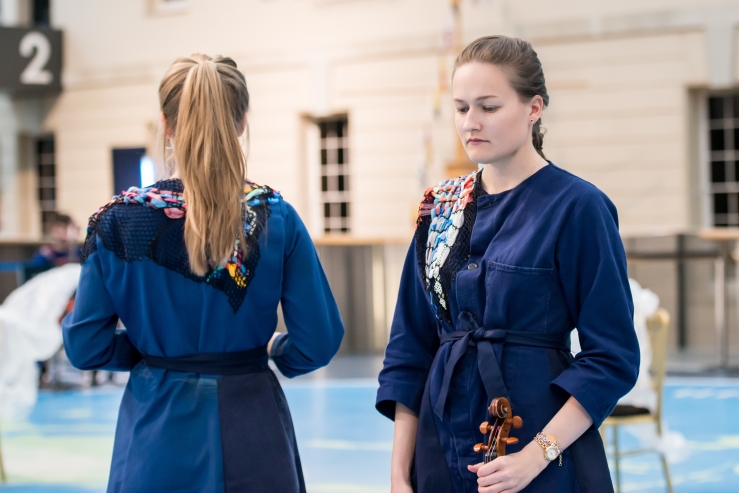 HH: We worked a lot with the musicians on theatricality and on facial expression, dead eyes – this far-away gaze, uniformity of sitting and standing position, and slow-motion movement.

WH: (In situ) Thoughts so far?

DF: (In situ) Losing my sense of self.

WH: On the backs of the seats that the musicians were sat on were plastic tarpaulin structures which at first I found very ugly and off-putting and somewhat incongruous with how attractive the space otherwise is. But the more I reflected on it, the more I realised that this was entirely appropriate because, in the context of the ocean, the plastic is a foreign and an ugly object.

HH: We also used really bright, fluorescent neon tube lights placed around the map for a similar reason: this very man-made feeling against the very beautiful setting of the room.

WH: (In situ) The climax of the piece, the denouement, was a recitation of a poem in our bone-conduction headset.

DF: (In situ) I was away with the fairies throughout. To use poetic recitation – it was like a veil (clicks fingers) had been lifted. It did mark the finale.

Veronika Kizilova (VK): (In situ) It’s like I dive in very deeply, and it took me a while to go back to the surface after the music’s finished. 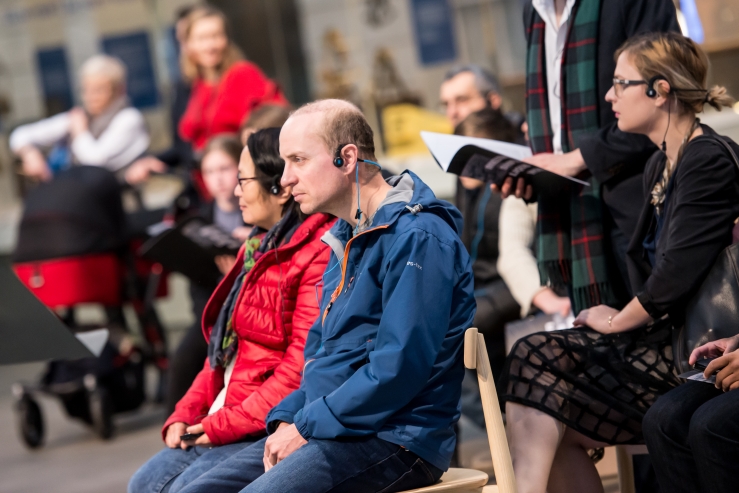 HH: I want to raise awareness of the issues, which is why I did the piece. I’m not doing it as a gimmick. It’s so complicated. As I was saying about plastic bottles for aid for refugees, how do you even begin to pick and choose between saving a person or saving the planet. I want to get people to think about this huge beast of a thing that we’ve got to deal with.

WH: If we missed the piece the first time around, will there be a chance to see it again?

HH: Hopefully there’s going to be another performance at the museum. It’s under discussion.

WH: Hollie, I wonder if you could give me a Hidden Gem Listening Recommendation.

HH: I would recommend Pauline Oliveros’ album Deep Listening. It’s immersive, expansive, drone-based music that’s extremely relaxing to listen to and all of it was recorded in a huge, cavernous, underground space.

WH: Hollie Harding, thank you very much for your time.

HH: Thank you very much, Will.

Let us know and share your TL life with us.